Trading Tip `The Wall´ – Why Do We Fall, Bruce?

This week, the price of bitcoin reached a low-point of -53% from its December high. A few weeks ago, I wrote about the Death of the “Get in before Wall Street!”-meme and why it made sense to Short the Great Bitcoin Bull. My viewpoint remains unchanged in that I’m still confident that the CME bitcoin futures listing was a core ingredient causing the bull run up to $19,891, as well as the recent fall down to $9,017 (Gdax). In this post, we’ll take a look at the stats from the bloodbath’s aftermath.

The Great Fall and Futures

This diagram shows the CME bitcoin futures trading volumes for the first month since their listing. During this month, 27,390 contracts were traded, which accounted for positions totaling 136,950 BTC (5 BTC per contract).

Upon CME entering the market, it was speculated that Wall Street would take charge over the price discovery of bitcoin. The futures market (CME) and the spot exchanges (e.g. Gdax, Bitstamp, Bitfinex) are indeed interconnected through the actions of arbitrageurs and market makers, so there is no flaw in that thinking. But at 136,950 BTC per month, the CME volumes are currently too low to have any noticeable impact on the market on their own accord. As a comparison, this Wednesday alone 128,631 BTC was traded on Bitfinex.

There however a certain signal value to the CME market action which may influence traders other ways. The clearest example of such a thing I’ve seen was during the initial hours of the Cboe bitcoin futures launch on Dec 10, where Cboe completely dominated the price direction even on minuscule volumes. The CME and Cboe are potential avenues for institutional traders. As such, other traders might assume that CME and Cboe traders have access to better information; that they are “in the know”, so to speak.

If you wanted to capture what the signal was from the CME during the days leading up to our recent Jan 17 $9,017 low, you would have needed to gauge whether the CME bitcoin futures traders were mostly entering short or long positions. To some people, this task is confusing since every futures contract has both a short and a long side, so no matter how many contracts are traded, the net difference will always be zero. But that thinking fails to encompass the fact that a trade is the match between two different types of orders; a market and a limit order. The limit order is placed by a person (often a market maker) who enters a price where he’s willing to buy (long) or sell (short) at. At that point that’s just an order; it doesn’t cause a trade to happen yet. The trade happens on the market order; a person hitting the “buy now”/”sell now” buttons that consumes the closest limit order in the order book. If we then compare the net difference between the different (buy/sell) market orders placed in a certain interval, we can then gauge where the price pressure actually came from. 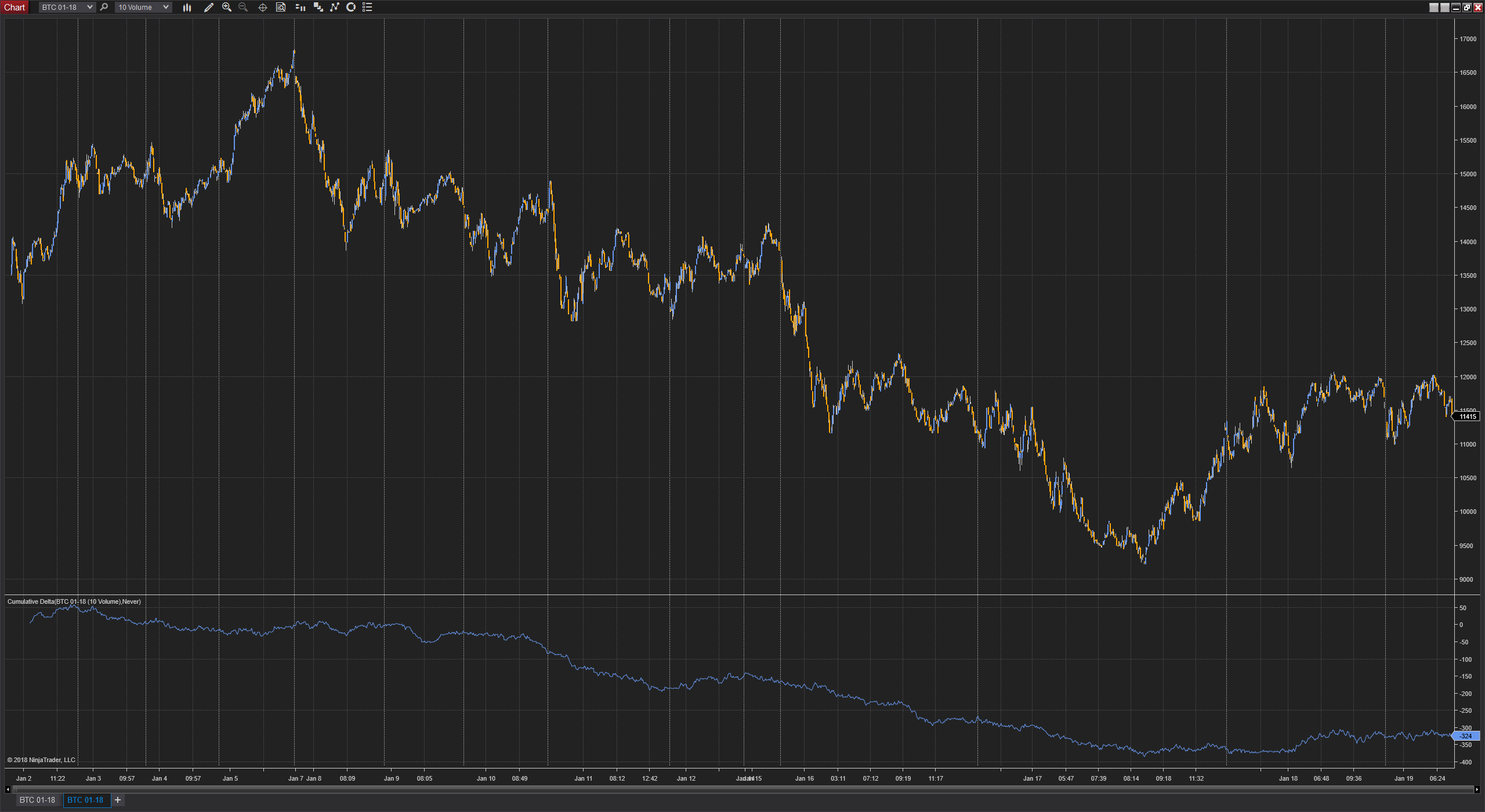 In the lower part of this image, we see the cumulative delta of the January CME bitcoin futures (big thanks to SpeculatorSeth for helping me pull this graph together). It tracks exactly what I described earlier; the difference between market order short/longs. As we can see in this graph (click here to expand image) there was an unusual increase in short positions around January 11. At the same time, the price was just bouncing around in the 12800-14200 range. Since the cumulative delta went negative while the price was more or less flat, that means the CME traders were to an extent betting on the crash to happen while the rest of the market didn’t. Thus, the signal you would have gotten from CME on January 11 would have been to sell.

Did CME cause the crash?

Probably not. We’re still in the Gangnam Style Era of Crypto and mainstream investors are the ones moving the market, not the ones at the CME. And most mainstream traders aren’t basing their trades at the CME bitcoin futures cumulative delta. I contend we’re going down because of increased regulatory concerns coming from South Korea and China, and because we went up too much in over-anticipation of the futures launch, i.e. this is a correction, not a crash. The CME futures traders were just right in betting that this would happen.

What should you during a crash?

In a previous post I detailed The Art of Dip-Buying. An alternative to buying the dip is converting BTC into altcoins during crashes. Big apartments’ prices are less liquid than small apartments, therefore big apartments’ prices fall more relative to small apartments in the event of a real estate price collapse. Thus, it can make sense to trade your smaller apartment for a bigger one during a dip. Altcoins and bitcoins behave the same way. Altcoins are less liquid and collapse much more drastically than bitcoin. Between 15-17 Jan, the bitcoin price fell -37% (Gdax), but the price of Cardano fell -55% (Upbit) in the same time span. If you stayed in bitcoin from the moment of the dip, your fiat value would have moved up +25%, while a move over to Cardano would have moved you up +32%.

What are your thoughts about why the market dumped? Let us know in the comment section below!

The post Trading Tip `The Wall´ – Why Do We Fall, Bruce? appeared first on Bitcoin News.